I. Call to order and Welcome

I. Call to Order
Speaker James Weston called the meeting to order at 12:05 p.m. He welcomed the assembled senators and guests to the meeting.

Chief Whitehead presented information regarding active shooter readiness on the Rice campus. Whitehead discussed the training that the Rice University Police Department (RUPD) receives annually. He said that RUPD also offers 60-90 minute training sessions for faculty, staff, and students. He noted that the training could apply not just to situations that might occur on campus, but also for off campus situations.

Whitehead stressed that the RUPD training staff is available to train entire departments or individuals, and he mentioned that the Rice football team has received the active threat training. He said that brown bag sessions on the topic are offered at several locations on campus.

Following this presentation, Julie Fette stressed the need for manual locks on all classroom and office doors, as well as annual lock-down drills. She asked the Faculty Senate to consider obligatory active threat training for all faculty and staff members.

Dean of Undergraduates John Hutchinson announced that Rice’s Alumni Affairs Office has been working with Rice’s Center for Career Development to create an improved professional development program for students. He said that because of their efforts, the number of companies that have been coming to campus to interview students has more than doubled, as has the number of students participating. Hutchinson described the Owl Edge Externship, a brief experience during the spring or winter break, where a student shadows a Rice alumnus for one to seven days. He said that the goal was to offer 25 externships, but the program exceeded this goal, with 125 students participating with 125 alumni. Hutchinson said that the Owl Edge Internships are of longer duration, and usually occur during the summer. He also described the software currently being designed to connect alumni and students.

Dr. Tom Kolditz, Executive Director of the Doerr Institute for New Leaders, described the activities of the new institute to date. He said that upon his arrival at Rice, he began with a listening tour, discussing leadership with approximately 175 individuals, including members of the Board of Trustees, vice presidents, members of the Student Association, residential college presidents, and 35 faculty members. He said that he has learned that Rice students play a major role in developing each other as leaders. Kolditz said that he wanted to involve students to the maximum degree possible, as well as having strong participation from faculty members.

Kolditz explained that the gift to Rice from the Doerr family specifies the director of the institute, a faculty advisory board to be appointed by the provost, and a pool of external advisors. Kolditz also described the Leader Development Council, which he said is facilitated by the Doerr Institute.

Kolditz stated that a pilot program was run recently between students and professional coaches. The students who participated in the pilot program reported that it was a powerful experience. Kolditz said that the institute is focused on student activities and does not anticipate curricular development. He invited the assembled faculty members and guests to visit the Doerr Institute. He stressed that he wanted input from faculty, and that his goal was to provide seamless delivery of leadership training to student without interrupting their studies.

For more information on the Doerr Institute, please see: http://news.rice.edu/2015/05/14/ann-and-john-doerr-donate-50m-to-develop-new-leaders-at-rice-university/

Faculty Campaign Chair Herb Ward announced to the senators that Rice has reached 50% of its goal. He showed the donations by division, and he noted that the Investments Division has had 100% participation, totaling over $13,000. Ward asked the members of the Faculty Senate to be advocates for donating to United Way. He reminded the senators that Board of Trustees Chair Bobby Tudor has promised to match the amounts given by new donors and any increased donations from repeat donors. Ward said that he became even more impressed with United Way when he learned that it has an overhead of only 12%. For more information: https://unitedway.rice.edu

Mike Wolf asked how the information regarding how much is donated and by whom is shared. Vice President for Public Affairs Linda Thrane said that Greg Marshall, Rice’s Director of University Relations, is the only individual with this information.

Kirby said that the law contains an “opt out” provision:

Kirby said that Rice would use its regular process for this required consultation, asking for information from the Faculty Senate, the Student Association, the Graduate Student Association, and the Staff Advisory Committee. In addition, Kirby said that a website has been established for questions and comments:
http://texassenatebill11.blogs.rice.edu/

Several senators asked questions and voiced their opinions. The Senate decided to set up a discussion page on the Senate’s wiki site to collect faculty comments.

Weston said that after collecting comments from constituents, the Executive Committee could draft a resolution at its next meeting (November 4) in time for the November 18 Senate meeting. Jane Grande-Allen encouraged faculty members, and especially senators, to attend the RUPD brown bag sessions.

Weston asked if there were any announcements from the floor; there were none.

Working Group chair Susan McIntosh explained that the draft report, provided prior to the meeting, was written after receiving feedback from several directors of undergraduate studies and from the Senate’s Executive Committee. She said that the purpose of today’s discussion was to receive additional comments from the full Senate.

McIntosh stated the members of the working group:

McIntosh cited the concerns of the working group:

McIntosh said that the working group proposes two solutions for these concerns: a revised New Course Request Form and a revised Review Process for New Courses.

McIntosh explained that the current New Course Request Form requires only the information needed by the Office of the Registrar (OTR) to enter a course into its system, and she provided the revised form recommended by the working group.

Regarding the review process, McIntosh said that although the current process for creating new courses is streamlined, its drawbacks are lack of faculty oversight of courses originating outside of departments, and the lack of an oversight mechanism to increase consistency of credit awarded both among departments and extra-departmentally.

McIntosh explained that the working group proposes adding a review level beyond that of the department, school, or dean. She said that this would bring Rice into alignment with its peer institutions, most of which have a committee on courses that reviews new course proposals. McIntosh provided a model of the proposed review process, shown below. 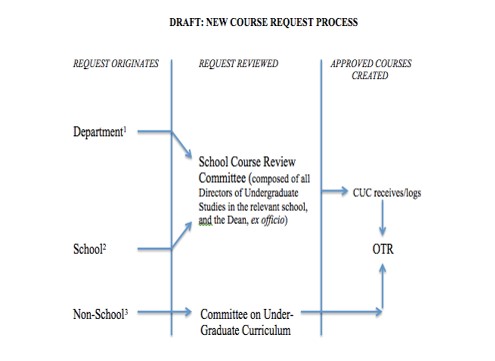 McIntosh said many departments have curriculum committees that have instituted thoughtful and rigorous practices for new course creation, and that one concern of theirs is that adding a school review committee would slow down their process of curricular development. She said that the working group considered two ways to address this concern. She said that one way is to use a “Rapid Course Creation” process for first-time or one-time courses:

McIntosh said that a second way to address this concern would be to use an alternate model (shown below) where the department can bypass the School Course Review Committee. 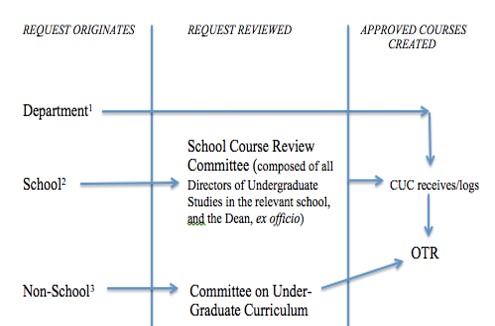 McIntosh then asked for comments and suggestions from the senators. One question about the proposed New Course Request Form was the information regarding the amount of work required from students. McIntosh said that the working group and the University Committee for the Undergraduate Curriculum (CUC) had both discussed this point. She said that some current courses do not use any type of student assessment; basic information is thus requested on the form, such as if written papers or tests will be required. It was then suggested that the faculty member proposing the new course could simply provide his/her syllabus. McIntosh replied that for courses being proposed for the first time, providing a syllabus could be discouraging.

Several senators discussed the current overlap of content that sometimes occurs among courses and suggested that a question be added to the form: “Are you aware of any courses that currently exist which this course will overlap?” McIntosh said that this point was also discussed by the working group, and that one possible solution is the step in the proposed model where the CUC receives and logs the requests, catching any overlap in course content.

The senators then discussed courses that are no longer offered at Rice, but which remain in the General Announcements (GA), and how to eliminate them. Registrar David Tenney said that every year, his office performs a roll call with each department, asking to eliminate old courses. However, he said that the department’s reply is usually that there are plans to offer the course very soon.

The discussion turned to the timing and procedures of the new form and review process, if approved. McIntosh predicted that the process to review and approve new courses would work quickly.

Mike Wolf asked if the proposed process offered sufficient review. Provost Miranda said that she believed that the most important item on the revised form is that the faculty member must list the Student Learning Objectives (SLO). She said that the very act of having to list the SLO, and then having a department chair or curriculum committee review it, will help to achieve the appropriate rigor in new courses.

Wolf recommended that the CUC look at the overall nature of courses and how they contribute to the curriculum. President Leebron suggested instead that the proposed process could solve the current problem. He went on to discuss shared governance at Rice, the authority that rests at the school level, and the collective sense of responsibility that the faculty have for the curriculum. He said that he trusts the process and the people involved. Provost Miranda also discussed the Dean’s Council that meets regularly, which she said learns from each other and shares information on best practices.

McIntosh said that the working group’s concerns were not so much about overall course standards, and that many courses/opportunities for students are valuable, but awarding credit hours is currently the only way to show this value. She said that not all offerings to students have to be for credit; they could be noted on a student’s transcript, for example. She recommended that the issue become part of a broader conversation.

At the end of this discussion, McIntosh conducted a straw poll of the senators regarding which review process model they favored, and Model 1 was selected.