PROCEEDINGS (To listen to an audio tape of this meeting, email senate@rice.edu.)

I. Call to order, Announcements

Speaker Susan McIntosh called the meeting to order at 12:00 p.m. The only announcement was a reminder that the next Senate meeting will be held on Wednesday, April 4, 2012.

A. Rice 2032 update – Summary of International/Global session will be posted; next session on Research is scheduled for April 23.
Board of Trustees Academic Affairs Committee will begin parallel conversations in the fall, with Rice 2032 summaries as a starting point

B. Senate leadership elections will be held April 18

C. New Conflict of Interest Policy draft has been posted on wiki

E. Syllabi archiving will be activated for Fall 2012

Jane Grande-Allen, Deputy Speaker and Chair of the Nominations and Elections Committee (NEC), gave an update of the NEC’s actions.

IV. Old Business : Proposal for a non-thesis Master of Arts option in Philosophy

McIntosh introduced the proposal and explained a few important points:

Richard Grandy (Philosophy) and Vice Provost Paula Sanders explained that this program cannot be compared to a professional master’s degree, nor does it signify failure to earn a Ph.D. Lora Wildenthal (History) stated that, in the History Department, where a similar degree can be awarded, it often signifies someone whose life goals have changed; this degree is a way to show that they achieved success while at Rice. The Senate voted unanimously for approval, with one abstention. Please use this link to view the approved proposal: Non-Thesis Masters of Artsoption in Phiilosophy.

A. Motion to approve a new Post-Masters Artist Diploma in Music

McIntosh presented the proposal and reviewed the following points:

Ben Kamins (Music) explained that the current doctoral program in the Shepherd School of Music is geared towards achieving an academic degree, to the exclusion of those students who are more performance-oriented. Kamins also explained the large ensemble component required in the proposed program, including a combined faculty and advanced student ensemble. The Senate voted unanimously to approve the proposal: Post-Masters Artist Diploma in Music.

B. Motion to approve a new Professional Science Masters track in Space Studies

McIntosh stated that the proposal combines core courses in science and engineering with a professional skills component in business, policy, communication, and a 3-6 month internship. David Alexander was available to answer questions, but there were none. The Senate voted unanimously to approve the proposal. (Alexander recused himself from the vote.) Please use this link to view the approved proposal: Professional Science Masters in Space Studies.

Jose Aranda (French and Hispanic Studies) was present to discuss the proposal. He said that the focus was to develop a program that was distinctive from the current Hispanic Studies major. After a short discussion, the Senate voted to approve the proposal, with one abstention. Please use this link to view the approved proposal: Latin American Studies.

Change paragraph 7 of section 2 of the Constitution to read,

"Three members are to be, and elected by, benefits-eligible faculty holding non-tenured, non-tenure track teaching appointments at the ranks of instructor, lecturer at any rank, artist-teacher, associate professor, or professor in the practice, excepting adjunct, visiting, and post-doctoral appointees."

Caprette explained that one reason for the motion is the large increase in NTT faculty at Rice over recent years, as shown on the chart below. 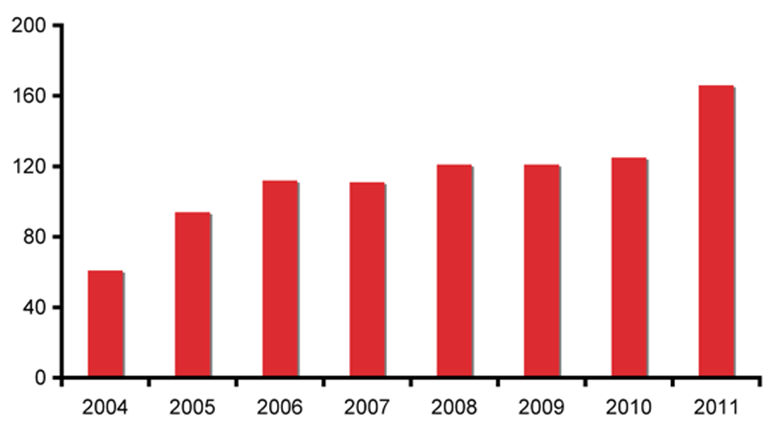 In addition, Caprette predicted that NTT-Teaching numbers will continue to increase due to:

• Program in Writing and Communication

Caprette was asked if the working group had considered guidelines regarding representation by school. Caprette replied that the topic was discussed, but the working group decided not to make the motion more complicated. After a short discussion, amended wording for the original motion was moved and seconded, and is shown below.

Change paragraph 7 of section 2 of the Constitution to read,

"Three members are to be, and elected by, benefits-eligible faculty holding non-tenured, non-tenure track teaching appointments at the ranks of instructor, lecturer at any rank, artist-teacher, associate professor, or professor in the practice, excepting adjunct, visiting, and post-doctoral appointees. No more than one representative may come from one school."

The amended language was discussed, including a request to table the proposal until the next Senate meeting. However, McIntosh pointed out that if the motion were delayed, there would not be enough time to run an election before the semester ends. The Senate voted to approve the amended language, with two Senators opposed. The vote to approve the now-amended motion was held, with the Senate voting unanimously for approval.

A second motion was presented for a one-time waiver of the By-laws Section 3, which requires that “elections for Senate members will occur before the second Monday in April” (April 9, 2012), such that:

Election for the Non-Tenure-Track Teaching seat(s) will occur before April 20, 2012.

The motion was moved, seconded, and then unanimously approved by the Senate.

McIntosh explained that the proposed motion is to reduce the current Lifetime Physical Activity Program (LPAP) graduation requirement of two courses carrying zero credits to one course carrying one credit, as recommended by the CUC and supported by a recent resolution of the Student Association (SA).

Motion: that the present Lifetime Physical Activity Program (LPAP) requirement be reduced to one course, and that this course carry a single credit.

Jeffrey Kripal, chair of the CUC, said that the CUC was asked to look at three issues: the current requirement of two courses, whether the courses should be for credit, and whether Rice student-athletes should be exempt from the LPAP requirement. The CUC recommended the reduction to one course, carrying one credit, and to maintain the requirement for athletes. A lengthy discussion ensued, including comments from Kevin Kirby, Vice President for Administration; John Hutchinson, Dean of Undergraduates, Registrar David Tenney, and a representative from the Student Association. Selected comments are shown below.

Question: Why not two courses?
Answer: Due to the increased enrollment at Rice, we do not have the resources to accommodate two courses for all students. Currently, it is mainly seniors who take LPAP courses.

Randy Batsell moved to call the question (ending discussion), and it was seconded. The Senate voted to approve the motion to end discussion, with three opposed and one abstention.

Next, the Senate voted to approve the original motion, with four opposed and one abstention. The new language will appear in the General Announcements for the 2012-2013 academic year.

F. Motion to approve a change in rules on Pass-Fail within the major

McIntosh said that the motion, proposed by the CUC, and moved and seconded by the EC, is to approve a change in rules on Pass-Fail within the major, making it possible for students to take courses within their major department or area pass/fail, as long as the courses are not used to meet the requirements for their major. Currently, pass/fail courses are only allowed outside the student’s major. The proposed change in the General Announcements is shown below:

Undergraduates may register for courses on a pass/fail basis. Students:

Kripal explained that the motion has come to the CUC many times, and its purpose is to encourage risk-taking within a student’s own major. Kripal was asked how electives that are required for one’s major would be affected. He replied that if the elective is required for one’s major, it may not be taken on a pass/fail basis. In further discussion, it was noted that once a student fulfills the requirements for his/her major, he/she may take more classes in their field pass/fail, but they cannot count towards the major. John Hutchinson proposed a simplification in the motion’s wording, shown below:

“Students may not take as pass/fail those courses used to meet the requirements for their major.”

Caldwell spoke against the pass/fail system as it is currently configured. Kripal replied that although sympathetic to this idea, the CUC was simply asked to look at this focused request. Another Senator spoke up against pass/fail classes, while a third spoke in favor of them. Ramon Gonzalez stated that while some students may be trying to get away with something, others are genuinely interested in the course. Batsell recommended that next year the Senate look into the intellectual effect of pass/fail courses.

A vote was held on the amended motion, which the Senate voted to approve. Twelve Senators voted for approval, 6 voted against approval, and 3 abstained.

McIntosh provided some background information on the proposed Distinction in Research and Creative Works, which will appear on the students’ diplomas and transcripts, unlike departmental honors. She said that the Senate passed this issue to the CUC in December 2010. Provost McLendon appointed an ad-hoc committee, chaired by Matt Taylor, in February 2011. The resulting proposal was passed to the EC with the CUC’s recommendation. At this point, the EC circulated the proposal to Deans and Chairs for comment; the 17 comments received were shared with Taylor, who agreed to revise accordingly.

McIntosh said that the revised proposal was presented to EC, and further revisions were suggested, resulting in the proposal posted on the wiki for review by faculty. Revisions included:

• Expand beyond “Research” to include creative works

• Attention to additional burdens on faculty, including IRBs

• Biennial review of the program by Dean’s Council

Senators asked what the distinction will add to Rice, to which Taylor replied that it is a way to recognize the great work of students using other worthy criteria instead of their grade point average. It was noted that while departmental honors also serve this purpose, they only recognize a few students. John Hutchinson spoke in favor of the distinction, while Danijela Damjanovic expressed the concerns of her colleagues in the Math department. One of the SA representatives in attendance at the meeting said that the distinction might help to reduce the number of students seeking double and triple majors, which is the current method students use to stand out from the other students.

A discussion regarding evaluation criteria for the proposed distinction began, but as it was time for the meeting to close, the proposal was tabled until the next Senate meeting, where it will be the first issue discussed.